Available in paperback by order from your favorite bookseller and in Kindle format from Amazon.

In the 1960s, Stanford University was already known as one of America’s “great research universities.” Less known to outsiders, it was an essential cog in the U.S. war machine during the Vietnam War. From the mid-1960s through the end of the Vietnam War in 1975, a dedicated, evolving group of students and other members of the Stanford community challenged that role and the leadership of the university itself.

This is the inside story of the Stanford radical, anti-war student Movement, how activists used research, education, political activity, and direct action to win over their campus cohort, alter Stanford’s direction in the world, and lay the foundation for what became known as Silicon Valley.

As the U.S. appears to be embarking upon a new era of progressive militancy, the Stanford Movement’s experiences provide important lessons for new generations of activists. Though organizers today have at their thumb-tips communications tools that sixties activists never dreamed of, the fundamental principles of student and community organizing have not changed.

At times, we broke rules, laws, and even windows. But we believed and continue to insist that what we did was justified by the imperative of halting the extreme violence and gross violations of international law visited upon Southeast Asia in our names.

I kept what I believe to be most of the fliers, newsletters, posters, press releases, and other papers published by the Stanford Movement beginning 1966. I organized them by topic and year, and I stored them in file cabinets at the Pacific Studies Center, the non-profit started by the Stanford Movement in 1969. In 2009, with the help of Jeff Kane and my father-in-law, Martin Gorfinkel, we started placing those documents, with brief descriptions, on the Web in the A3M Historical Archive. Within those documents are a number of my contemporary reports. I quote from them liberally.

In writing Disturbing the War, these documents have proven invaluable in supplementing and correcting my memory. In addition, The Stanford Daily’s searchable online archive has been extremely helpful, particularly in checking dates. (See The Stanford Daily Archive.) I have including links with most of my references, so historians and other readers have easy access to original sources. Since it is difficult to retrieve online links from a printed book, Jeff Kane has created these pages for each chapter, providing direct links to all of the online references in the book. 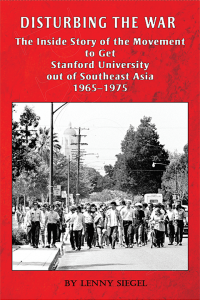